Nugville, CO—After many high-profile missing nug cases remain unsolved, many in the community have come up with novel theories as to why so many go missing in the Nugville Forest. While many theories have been posited—aliens, the infamous monsters Cheech and Chong, Frankennug’s barbaric experiments, Google map errors, dabbers—the most pervasive of these is the idea that Cypress Hill’s 2001 Smokeout Tour is still haunting the woods surrounding Nugville.

Once thought to be a story to scare juvenile nugs into good behavior, mounting forensic evidence has pointed to the fact that the 2001 Smokeout Tour may have actually happened.

“In recent years, we have found discarded JNCO jeans, chain wallets, red hats (presumed to have been worn backwards) and numerous Sony Discmans in the Nugville Forest,” says Nugville University Archaeologist Indica Jonez. “When one adds these findings to the heaps of anecdotal evidence provided by residents, one comes to the terrifying conclusion that Kottonmouth Kings may continue to stay blazed all day, no matter where they’re creepin’ in the Nugville Forest.”

Locals have reported the terrifying sounds of B-Real, still indecisive as to whether he wants to be a Rock Superstar or a Rap Superstar, haunting the forest. It is speculated that the last sound many of the missing nugs heard before going up in smoke was B-Real singing “I want to get high, so high.” A truly chilling end for these unfortunate nugs.

To make matters even worse, many others have reported hearing the discordant, caterwauling din of NOFX echoing throughout the woods. One local resident, who wished to remain anonymous, told our reporter that “it wouldn’t be so bad if they could sing in key, fix the intonation on their instruments and play in time.”

Whether one believes the legend of Cypress Hill’s 2001 Smokeout tour or not, one thing is certain: nugville residents continue to live in fear of The Deftones, Kottonmouth Kings or Cypress Hill immolating them should they stray too far into the woods. The only way one can imagine the situation being any more frightful is if a Willy Nelson or Snoop Dogg tour should make its way into our town. 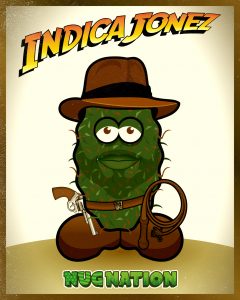